The Magic of Hill Training for Runners (workout included)

Growing up as a runner I used to hate running hills.  I remember moving to Maine my junior year of high school and really struggling in any race that had hills…which during cross country season seemed to be all of them.

Maybe it was because I was raised in South Florida, where the only hill is either the dump (yes, we did have one race on it every year) or the intercostal bridges.

I tended to like the pancake flat running along the beach where I could actually breathe.   So much so, that I returned to south Florida for college at Florida Atlantic University.  Although, at that stage of running, the competitions was far more fierce and I noticed every time we competed against schools out of state, we would lose badly!

Between experiences and studying exercise science in College, I soon realized why doing hill workouts was crucial for running success.

Physiologically, the higher stroke volume of the heart (heart efficiency) and recruitment of more motor units per muscle fiber are two of the things necessary for speed.  Hill repeats require the activation of both.

Hill repeats engage all those running muscles and it’s nearly impossible to get into a rhythm which prevents the body from “getting comfortable.” This is probably the reason why people hate doing hills so much!

Remember, that the moment the body becomes comfortable, it also conserves energy and stabilizes itself.  That is not a bad thing, and actually it’s a necessity for racing, but during training you’ll want to avoid the plateaus in order to get faster.

If you’re looking to improve your running, I highly recommend that you implement some hill workouts on your weekly running regimen.  You will get faster.  Hills will recruit more of the running muscle fibers, it will improve the connection between your nervous system and musculoskeletal system, and also help improve your running efficiency.  All those things will translate to faster leg turnover while running on flat roads.

You also benefit from pumping the arms up the hill, and from the core being activated.  Yeah, it’s pretty much a full body workout, and it’s free. All you need is a hill!

Another positive of hill training is that you are recruiting all the running muscles without going at peak speed, which often leads to injuries. So, it’s ok to add hill repeats every week! Make sure to do plenty of calf and achilles stretches afterward since hills tend to pull on those areas a bit more. This is key to prevent plantar fasciitis as well.

K-Tip: Be sure to focus on the hip forward drive as you climb up the hill, keep the knees high along with shorter strides and don’t be afraid to pump your arms.

Cooldown for 5 min and stretch it out.

After each rep, make sure to walk back down for recovery (very important to get the full rest before starting again so you don’t injure yourself. Also, the walking downhill prevents the quads and knees from being overloaded which can also lead to injuries).

Cooldown for 5 min and stretch it out.

If you’d like some guidance or inspiration for running and life, feel free to join my weekly coaching email list.  We’ll talk training, share some tasty recipes and even work on the emotional and mental conditioning for peak living. 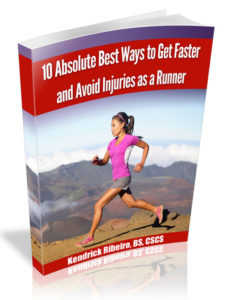